St. John the Evangelist SchoolA Blue Ribbon School from A to Z!

I love making author visits to the schools! 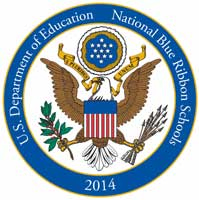 One of my favorite schools is St. John the Evangelist, (SJE) School in Streamwood. A big reason for this is their dynamic principal, Mary Ellyn Billmeyer.

You will never receive a more gracious welcome than when a guest at St. John the Evangelist Schooland it starts with their principal! And, this welcome extends far beyond kindness to strangers. Just this year, Principal Billmeyer established a program where teachers take turns as greeters in the parking lot each morning to welcome students and their parents. And, often, you'll find their principal right out there with them to extend an enthusiastic "good morning" to all.

Mary Ellyn Billmeyer has enjoyed a distinguished career as an Archdiocesan principal since 1989. In July of 2011, she was wooed to SJE School by parish pastor, Father Ted Schmidt, who was eager to see the school grow and knew Mary Ellyn was just the person to make that happen. Within two months, a brand new Pre-K program was implemented and, within the last four years, Mary Ellyn's insightful leadership has helped to increase the student body of the school by a whopping 60%. 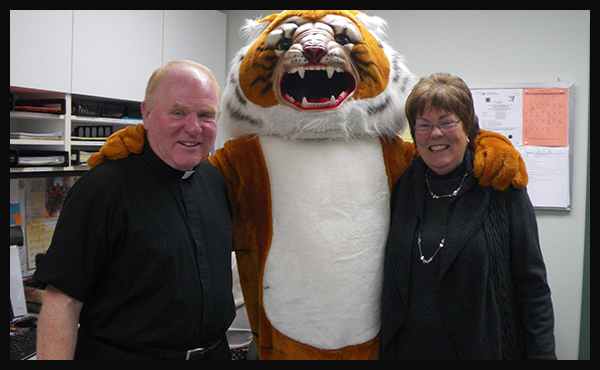 I cannot mention the principal's office without acknowledging a truly wonderful school secretary, Carol Retz.Carol takes her job and the mission of the school to heart in ways that go far beyond the call of duty to reach legendary proportions. No matter what activity is in progress at the SJE School, you can be sure; Carol Retz has something to do with the success of it!

Principal Billmeyer praises her friend, former St. John the Evangelist Parish Pastor Father Ted for his enthusiastic hands-on involvement in the school: "Fr. Ted was beloved by all for his wisdom and enthusiasm as our spiritual leader. He was such strong proponent of Catholic education and always sought ways to further the mission of our school, even from his pulpit." 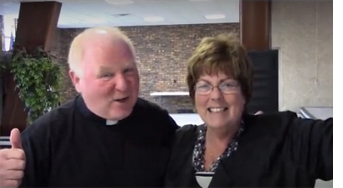 Sadly, Fr. Ted passed away in December of 2014way to soon for all who knew him, and that includes me. Happily, Fr. Ted was able to share in a milestone achievement for the school just a few weeks prior to his death. At a ceremony in Washington, DC., Principal Billmeyer and Fr. Ted celebrated as St. John the Evangelist school was awarded Blue Ribbon status from the U.S. Department of Education. This prestigious honor, which acknowledges outstanding achievements in education, is given to only a handful of schools throughout the country each year.

In my author visits to SJE School I have witnessed, first-hand, an environment of happy educators, ones encouraged by their principal to bring their special gifts to the classroom. The teachers' admiration and fondness for their principal is obvious. Principal Billmeyer's open door policy, and the ease in which she engages others in meaningful discussion, has brought great innovation and marked improvement to both teaching and learning at SJE School. As for the students, you won't meet a more enthusiastic, focused and respectful group of kids. 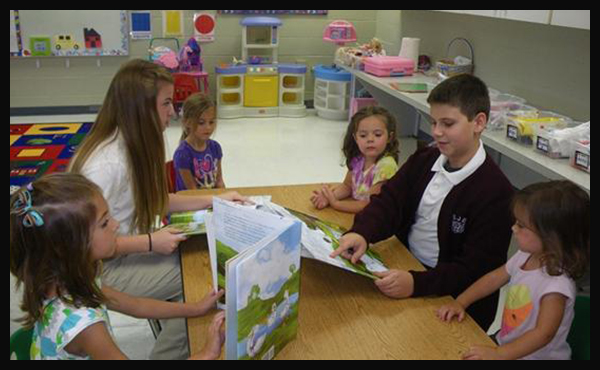 Before I visited St. John the Evangelist School, I sent along this writing challenge. Many of the classes participated. There were many great stories and poems written. I wish I could print all of them. Here are five stories I thought were especially good. Congratulations to all the authors! 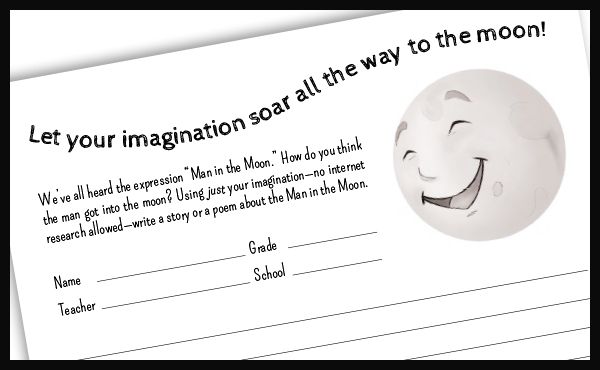 "One day a man went to the moon. It was the first time in his life. He was super duper excited!! When he got to the moon, he floated! He was not looking where he was going and fell into a deep crater!! The crater led inside of the moon. When he got into the middle, the moon grew eyes, a nose, a mouth, and eyebrows! He did not know what to do! He only did what he could. He stayed there. The End!"

"Sarah lost her older brother, William, in the winter of 2010 due to an accident; his school bus slid on a patch of black ice. The driver lost control and rolled over into a ditch. He had always told her that he wanted to be an astronaut and to be able to walk on the moon. She had never believed in him.

Five years after the incident, Sarah and her family gathered outside in the bitter cold to honor William. They looked up into the starry sky, shared some memories, and drank hot cocoa. All of them shared a few tears. After they had their moments, they sat in silence and looked at the night sky. The moon had decided to shine the brightest it has ever shone in a while.

'It looks a lot like William. Funny, huh?' her dad sighed, making an effort to make her smile.

Her parents put out the fire and folded up the folding chairs. Sarah had moped back to her room and looked out the window. Her dad was right; the moon did look like William. The moon smiled at Sarah and winked at her. She could not believe her eyes! The moon just winked like how William would! She smiled back, and laid her sleepy head down on the pillow and went to sleep.

Not only did she sleep soundly, but she went to sleep knowing that William had fulfilled his lifelong dream - to walk on the moon. To her, he will always be known as the Man in the Moon."

"When you look up at the sky, in the middle of the night, and when there is a full moon, do you see a face? I know the face is real because the face you see is me. Hello, it is nice to finally meet you and now it's time that you know the true story about me. I have lived in the moon since the beginning of time, and will remain there until the end of time. You might see me partially all the time and think that I don't see you, but you're wrong, I do see you.

Long, long ago, even before your grandparents were born, I was put inside the moon. This all happened when I wished to live forever. I remember the night like it was last. The date was January 1, 6000 B.C. and I was about to go to sleep for the last time, when all of a sudden I see a star shooting across the night sky. At that moment I knew that it was now or never to make my final wish. The wish was that I could live forever. Hold on, I know that you are thinking that it's impossible to live forever, which I thought so too, but that was the last thing I wanted from my mortal life, so don't judge. Later that evening I fell asleep for the last time, or so I thought, because the next day I woke up just like any other day. The thing that was different about that day was that I woke up looking down at Earth, along with all the people living on it.

Many years later, 8015 years to be exact, I'm still living in the moon and loving it. I love seeing what is happening all over the world below me. Watching the world is like watching a never-ending movie, with happy parts, sad parts, romantic parts, and suspenseful parts. Living above Earth never gets lonely because I get to talk to the stars, who were once people, just like me. I have heard many stories and told just as many, some stories are even the same just told in a different perspective. The gift of becoming the man in the moon, or the face people see when they look at the moon, is a gift that I wouldn't change for the world."

"Once upon a time, there was man named Manny Nicholas Damien Moon. His friends liked to call him Man N. D. Moon for short. Man N. D. Moon loved the Earth, and all the people and things on it. He always wanted to visit every country and city on the beautiful planet, and see for himself all the wonderful people and places. Unfortunately, Man N. D. Moon was a very poor man, so he couldn't afford to travel the world. Every night, he dreamed of the stars, so one night, he decided to wish on one. 'Dear Miss Star, please help me to see the world! Ple-' and before Man N. D. Moon could finish, his wish had been granted. He was no longer Man N. D. Moon, but the Man in the Moon!"

Waiting for that sudden spark,
That tells him where to go,

And tells him that it's time,
To let the people know.

Did I mention the man in the moon
Is a man of many schemes?

For he can clearly see
All of your dreams!

He doesn't mind,
For as long as you're kind,

He won't have to be,
The kind of moon you wouldn't want to see!

He'll give you better dreams.

Thank you, Elaine, for all of your kind words. Some days, you just need that "encouragement" and it makes you realize what a great school we have at St. John's. We look forward to MANY years of working with you.
Thank you too for recognizing the back-bone of our success - Mrs. Billmeyer and Fr. Ted Schmitt. Without their support and, of course, without Mrs. Retz, we could not do what we do!
Donna Kruse
7th Grade Teacher

So Proud to call this "DYNAMO" Principal my sister. She has dedicated her whole career to the private school sector. She not has done an "AWESOME" job in her career, but managed to always be there for her 2 wonderful children and wonderful husband. I admire and love you very much MEB.
Your baby sister
"ME"