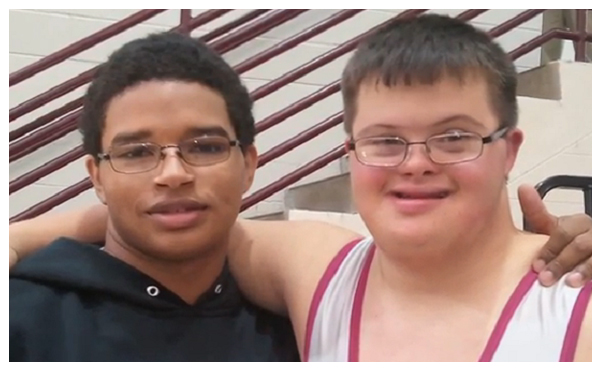 Let's "spread kindness wherever we go!"

During an author visit at a Chicago area school, after I shared my story Ducks in a Row, a second grader jumped from his seat, threw his arms wide in the air and exclaimed with great joy: "The MacQuackens teach us to spread kindness wherever we go!" This 7-year old reminds us that we humans intrinsically want to be kind. It makes us feel good. And, we want others to be kind. In fact, scientific studies show that when we witness acts of kindness or when we ourselves are kind, the "feel good" parts of our brains light up. So, it's no wonder that a young man's selfless act at a wrestling match in 2012 brought spectators to their feet and viewers of the news story to tears.

McIntosh High School's Demetrius de Moors looked forward to competing at the South Metro Meet Wrestling Tournament. Next to the state tournament, this meet is the most prestigious annual high school wrestling event in Georgia. As Demetrious worked hard preparing himself for competition, little did he know he would become widely celebrated, not for his athletic prowess, but for his incredible selflessness and kindness towards another athlete.

Michael Lind of Union Grove High School was excited about the upcoming South Metro Tournament, too. Born with Down Syndrome, Michael had never actually wrestled in competition, but he was a member of the team and he was always there to support his teammates. "They are my friends, they are my guys," said Michael.

A thoughtful call and generous response

Prior to the tournament, the Union Grove wrestling coach called the McIntosh coach with a special request: Would he ask his athletes if one would be willing to wrestle Michael in an exhibition match during the big meet? When the coach asked his players for a volunteer, Demetrius stepped up. On the day of the meet, Demetrius didn't just give away the win. He made Michael work for it. "I said to myself: if I could only wrestle one time, if I could only experience it one time with the crowd and the cameras, how would I want it to be? I tried to make it as fun and as special as possible so he could have something to remember." And Demetrious proceeded to do just that. There were takedowns on both sides and a real match before Michael claimed the victory. In addition to the cheering crowd, 40 wrestling teams from around the state were in attendance. What a wonderful act of kindness to witness and a really good teaching moment for young and old alike!

I love this beautiful story, which is full of kindness, selflessness and courage. It's a story that fills us with gratitude for all of its players: The sensitive Union High coach, who sought a meaningful and very public competitive opportunity for his young athlete. Michael: a good sport, who overcame his disability with an enthusiasm for the sport and support for his teammates, even though he had never had the opportunity to compete. Demetrious: who's generous spirit took him to great lengths, making sure his opponent had an experience that was "fun" and "special", one that would be "something to remember."

I hope parents will share this link with their children, coaches with their athletes and teachers with their students. And, if you'd like to put a bright spot in the day of your friends and colleagues, send them the link.

In closing, I ask you to please share with your children the wise words of two great 20th Century Philosophers

Act as if what you do makes a difference. It does. - William James

Unless someone like you cares a whole awful lot, nothing is going to get better. It's not. - Dr. Seuss

and then ask your kids to find ways to show kindness to others this week. Comment below and tell me what they find!

Hint: How do you feel when you watch this story?

Wonderful story. Thanks for sharing. Young ones often remind us adults how important it is to be kind and help others feel good about themselves.