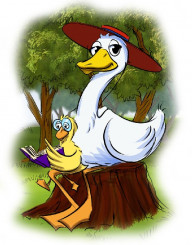 Millie MacQuacken, mother of nine, has been selected as the 2014 Lucky Duck Mother of the Year. As the DEO (Ducky Executive Officer) of Lucky Duck Publishing, I selected Millie as this year's winner after receiving an essay entitled "Why Our Mom's the Duckiest" submitted by Annabeth Serafina MacQuacken on behalf of her 8 brothers and sisters. The wonderful news was announced yesterday - Mother's Day. To learn more about Millie's creative mothering skills, read all about the #MacQuackens in the #luckyduckbook #Ducksinarow.

I hope your Mother's Day was just as rewarding and fun as Millie's. My beautiful mother, Rosa, has been gone for five years now. I thought of her with great affection yesterday. There was never a lovelier smile than the one my mother wore.

I love to read! Thanks, Mom, for opening up the world to me through books! 20th Century American Poet and Humorist Strickland Gillian is best known for this poem of gratitude he wrote to honor his "reading mother." Enjoy!

I had a mother who read to me
Sagas of pirates who scoured the sea.
Cutlasses clenched in their yellow teeth;
"Blackbirds" stowed in the hold beneath.

I had a Mother who read me lays
Of ancient and gallant and golden days;
Stories of Marmion and Ivanhoe,
Which every boy has a right to know.

I had a Mother who read me tales
Of Gelert the hound of the hills of Wales,
True to his trust till his tragic death,
Faithfulness lent with his final breath.

I had a Mother who read me the things
That wholesome life to the boy heart brings-
Stories that stir with an upward touch.
Oh, that each mother of boys were such!

You may have tangible wealth untold;
Caskets of jewels and coffers of gold.
Richer than I you can never be --
I had a Mother who read to me.

Each week I'll have a WORD SCRAMBLE on the #luckyduckblog. This week it's a four word sentence:

Hint: This sentence is something a child might say.
Have fun as you and your little one figure it out together!
Categories: uncategorized
« back to all blogs