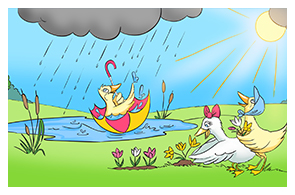 Greetings and Happy Springtime from #luckyduckbooks! My homepage illustration for April and May represents the old adage: April showers bring May flowers.

I'm always curious to find out the origin of popular sayings.I was surprised to learn that this one goes all the way back to the 16th Century. The rhyme is an excerpt from 500 Points of Good Husbandry by English poet and gentleman farmer Thomas Tusser.Published in 1557, this little poem originally read:

Which version do you like? Mr. Tusser's original gets a nod from me. But, no matter the version we use, this little saying is a great way to remind our children - and ourselves - that very positive things can often come as a result of happenings that might first appear to be not so swell.

When I asked my 11-year old friend Julie T. what this saying means to her, she answered, "It's like when something bad happens and you suffer, but it ends up being for something good. You have to mow the lawn and pick up dog poop, but you earn the money to buy a new video game!" Ask your children what this saying means to them.I would love to hear some of their comments, so please send them to me!

A favorite song the #MacQuackens and I love to sing is, what else? April Showers! Do you know it? My mother taught this lovely little ditty to me when I was very young, and it stuck. I still love it! Here's a little history about the song:

Songwriting team Louis Silvers and B.G. DeSylva borrowed the Thomas Tusser 2-line poem for their 1921 hit April Showers, which was first recorded by Al Jolson and later performed in his Broadway play Bombo. April Showers would become one of Jolson's signature songs. Scores of singers have performed and recorded this song throughout the last nine decades, including July Garland, Bing Crosby and Frank Sinatra. I found a wonderful old clip of a very young Mel Torme, AKA The Velvet Fog, performing April Showers with a great jazz group. They even have a harpist for the raindrop effect, and Mel hits the skins. See it on YouTube:

Below are the lyrics. Though you don't often hear the verse, I've included it because it's a good one! Enjoy this with your children.

(Verse)
Life is not a highway strewn with flowers
Still it holds a goodly share of bliss
When the sun gives way to April showers
Here is the point you should never miss:

Though April showers may come your way
They bring the flowers that bloom in May
So if it's raining, have no regrets
Because it isn't raining rain, you know
(It's raining violets)

And where you see clouds upon the hills
You soon will see crowds of daffodils
So keep on looking for a blue bird
And list'ning for his song
Whenever April showers come along.

And now, for this week's WORD SCRAMBLE:

Hint: the names of two flowers from the song!
Categories: uncategorized
« back to all blogs